Previously I stated that the cost of using a virtual function has gone down, but I have been doing a bit more thinking on this and feel I should add a further comment.

Virtual functions are still not great

It is probably simpler to consider, would you consider adding an ‘if’ to you code if it isn’t really needed. It 1) adds complexity, 2) increases latency. A virtual function does exactly the same.

Virtual functions provide a lot of functionality when writing the code but this can often be achieved using other C++ language features.

So it might be worth considering using only the required language feature at the required time, in order to write cleaner code, and avoid the proliferation of class hierarchies in code.

A nice example of writing better code without virtual functions is shown here, I stole some of his ideas in this blog entry! :

Virtual functions are useful for runtime polymorphism, but often this is not required and really what is required is code reuse (templates). Virtual functions provide a lot of functionality, often more than needed.

Having said that, if you need a virtual function, don’t be afraid to use one! Its a wonderful feature of the language.

We are all STILL learning to write code!!!

Speed currently is about 20ns but was an order of magnitude different a few years ago. Things change!

Doing some googling on the subject you can find older pieces that specify that virtual functions as very in-efficent (circa 1995) mainly due to the compiler having to throw out the instruction cache and restart each time. This however becomes less evident using a super scalar architecture and really we are then left with whether the instructions are in the code cache or not, which is probably at worst in L3 cache unless your code is large. 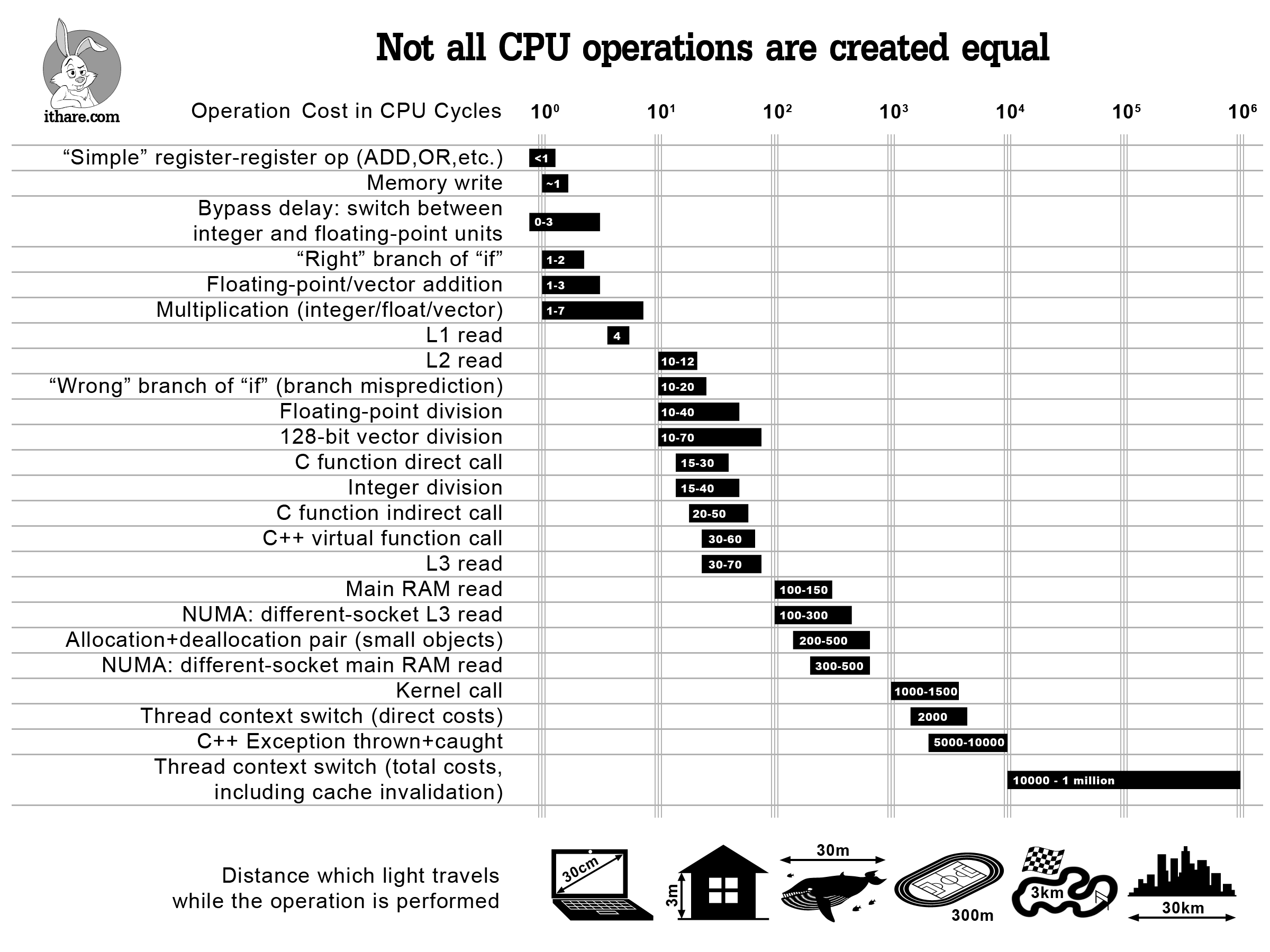 And if you want to read a LOT about optimisations.

Virtual functions aren’t the bottleneck they once were, but as still not as fast as direct function calls. Really depends in what problem domain you are working. <100us, use a virtual function.  <10us you have to be a bit more careful. But a better design will always trump everything.

Looks like speeds to main memory are getting faster….

Main article from StackOverflow has a lot more detail.

Performance monitoring is becoming an increasing part of low latency C++.  As the speed and flexibility of CPUs have increased the ability of existing technologies to monitor code performance has been found wanting.

Valgrind simulates the processor but not down to the actually CPU which may say reduce its clock speed due to local heating or some other weird hardware event. Also running instrumented code can be extremely slow.

Intel has gone down the vTune route which under the hood uses msr functions. These read the actual hardware counters stored by the CPU.  As intel are doing this themselves we can be sure that this functionality will be around for the foreseeable future and can look to leverage it.

This is the simplest instruction which allows us to measure accurately timing between start and end of two points.

There is a link to some code cycle.h at the bottom of the text, which shows how to execute the instruction.

It appears that rdmsr/wrmsr were initially aimed at memory bank switching and alike, but as time has gone on the functions allows access to specific hardware statistics.

Using rdtsc will give an indication of how the code performs but may not give specific details of any bottlenecks caused by instructions/cache misses. rdpmc allows for a finer grain of examine the processor. Execution time appears to be 24-40 cycles.

Example how to read the performance counters.

from the above page:

Installed gitlab. Mostly straight forward, but if it crashes or the box is powered off, then gitlab will not come up again.

Gitlab runs in docker so you need to log onto the docker and delete the unicorn process id.

I found this on the blog below.

Gitlab appears to use a LOT of memory and on a small box, such as a synology, this may not be great. I will have to see how it goes as only have 4GB at  present.

Gitlab uses unicorn.pid file to track if the process is running. This is fairly standard way of doing things, but if something bad happens this unicorn.pid isn’t cleaned up. This isn’t a great deployment solution. I might look at writing a startup script to always remove this. This however is just a patch and synology really should look at making this package more robust.

Herb Sutter gives a nice talk on C++11 and Sequential Consistency.  The C++11 standard codifies what this means, and thus provides a consistency across all compilers (which are standard compliant).

There appears to be a lot about installing gdb into eclipse on the web. However to actually get it to work is a little tricky. Basically it comes down to gdb 8.1 doesn’t work and you need to go to an earlier version 8.0.1

The basic instructions are.
1) Install Xcode
2) Install eclipse.
3) install gdb using homebrew. (Need to install 8.0.1) see link below. Latest doesn’t work.
4) Create a certificate to sign gdb. This again is tricky as creating the certificate under system doesn’t directly work, so you need to install it under login and then drag and drop it to system.
5) You don’t need to mess around with “csrutil enable –without debug”.

Caveats I learnt: If you remove a the signing from the gdb executable, you need to reinstall it or you can’t resign it. I believe you can however re-sign it if it is still signed.

Cut and paste from the page:
Thanks to lokoum

I have several domains but need to be able to send and receive from the all.
The solution appears to be to run Mail Server Plus. Note don’t use the standard one as that is old. It is fairly simple to install, plus you need to poke a few holes through the firewall so the mail can be send to my server. It is however useful to setup the postfix stuff which allows mail to received and forward. This is documented in

It must be noted you can assign names such as

so it will send [email protected] to 2 recipients one even being forward out onto the SMTP outbound.

I default my second mail server, at a lower priority, to the domain email routing server of the supplier. So if my server goes down. the domain server will still forward to my mail, to say a gmail account.

SMTP seems to be working ok, but a bit worried about being hacked.

Preamble
Looking for a domain, and needing to forward e-mail.

Actions
I have been looking for a personal domain to start another blog and I found this site.
https://www.domcomp.com which does a price comparison on website prices.
Needless to say this lead me to buying another domain bromhead.me from godaddy for £3 + tax. Was shocked at the tax as wasn’t expecting to pay another 60p! 🙂
GoDaddy is a reasonable supplier but for this budget price they don’t seem to provide basic e-mail forwarding. They provide DNS utils so it was simple to add a MX record and forward my mail to http://improvmx.com and then from there bounce it to my normal account.